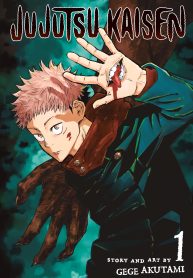 Yuuji, a student at Sugisawa Town #3 High School, happens to be ultra-talented at track and field… But since he has no interest in running around in circles, he’s happy as a clam being a member of the Occult Research Club! Although he only joined up for kicks, things start to get serious when an actual spirit shows up at the school.

I know this release doesn’t look great. The raws were apparently some timed release in Japan and the only good raws available are screenshots. The raws were pretty bad but I did my best to upscale them. That being said, I know they still don’t look great. I did this basically as a placeholder until shueisha decides to officially color the whole series.

I put this disclaimer because I don’t want everyone to be complaining about the quality. It is not great. I know it is not great. Again, its just something I did until good raws become available.

Its Viz Translation. Its 100% readable.