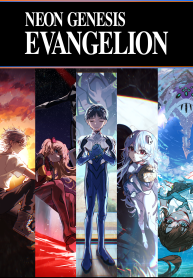 Books based on the landmark animated series that redefined the mecha genre.

Japan’s most controversial anime series ended…but not the manga version of Neon Genesis Evangelion! Series co-creator Yoshiyuki Sadamoto’s personal interpretation of the Evangelion characters and story is sure to intrigue new and old fans alike. In 2015, the “Angels” have returned, and Shinji Ikari, a fourteen-year-old child of the new Earth, is forced by his father Gendo—commander of the secret organization NERV—to pilot the monstrous biomechanical weapon called “Evangelion” to match the Angels’ fearsome power…

In 1999, a meteorite crashed into Antarctica. The impact melted the continental ice mass and drastically raised sea levels, damaging the world’s climate and causing the deaths of over half its population. Now in 2015, devastating creatures of unknown origin—referred to as “Angels”—ravage what remains of the planet.

In the heavily fortified city of Tokyo-3, 14-year-old Shinji Ikari is destined to halt the Angels’ onslaught. Recruited by his father’s secret organization NERV, Shinji is enlisted as a pilot of an Evangelion, a massive bioorganic android created solely to defeat the Angels.

Suddenly with the weight of the world upon his shoulders, Shinji must find the courage and drive to stand up for the future—and himself. But as skirmishes between the Evangelions and Angels become recurrent, the horrifying truth of the world is slowly revealed.

Yoshiyuki Sadamoto, one of the founding members of the animation powerhouse Studio Gainax, is the character designer for The Wings of Honnemaise, Nadia, Neon Genesis Evangelion and many other anime, illustration and art projects. His art book, Der Mond, is also available in English translation from VIZ Media. Neon Genesis Evangelion is Sadamoto’s only full-length manga series.

NOTES:
. There are only 4 chapters, future colored chapters don’t exist anywhere else on the internet before you go looking.
. This version has been upscaled by The Colored Council (ColoredManga.com)