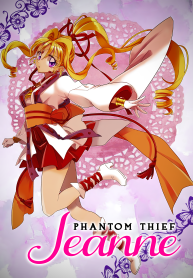 High school student Maron Kusakabe has a secret: she’s Phantom Thief Jeanne. She sneaks into private art collections to steal paintings in which demons reside. Jeanne’s task is to seal the demons before they can devour human hearts. So far she’s been able to evade the police on her midnight outings, but now another thief has come onto the scene—Phantom Thief Sinbad—and he’s trying to take the paintings before she does!

It’s nearly the end of the century, and one girl has been breaking the news: Kaitou Jeanne, a phantom thief supposedly sent by God, has been stealing paintings all around the city. Her real identity is Maron Kusakabe, a 16-year-old rhythmic gymnastics enthusiast and student at Momokuri Academy— something unknown to all, even her best friend Miyako Toudaiji, who is in charge of the police chase for Jeanne.

Hidden inside the paintings Maron steals are demons sent by the demon lord, who plans to weaken God’s power by having his minions possess human hearts. Assisted by the minor angel Finn Fish, it is up to Maron as the reincarnation of Jeanne d’Arc to assume her alter ego, hunt down the cursed paintings, and seal the vile demons away. However, the tough job of balancing this duty with her lonesome high school life only proves more challenging when a mysterious new phantom thief makes his appearance—Kaitou Sinbad.

Arina Tanemura began her manga career in 1996 when her short stories debuted in Ribon Original magazine. She gained fame with the 1997 publication of I•O•N, and ever since her debut Tanemura has been a major force in shojo manga with popular series Phantom Thief Jeanne, Time Stranger Kyoko, Full Moon, The Gentlemen’s Alliance † and Sakura Hime: The Legend of Princess Sakura. Both Phantom Thief Jeanne and Full Moon have been adapted into animated TV series.

NOTES:
. The series was first compiled into 7 Tankōbon volumes, then into 6 Kanzenban volumes, and then  finally into 5 Bunkoban editions. This release follows the latest 5 volume structure.
. Any deviations from the official english text are marked by a small wrench (🔧) next to the text, e.g. instances where VIZ forgot to even add the text or SFX (i.e. left blank) are left in Japanese along with a wrench(🔧).