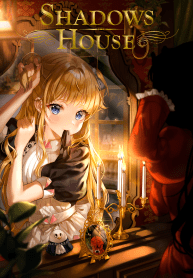 Shadows House (Japanese: シャドーハウス, Hepburn: Shadō Hausu) is a Japanese manga series written and illustrated by the duo So-ma-to. It has been serialized in Shueisha‘s Weekly Young Jump since September 2018

In the depths of a murky mansion lives a group of enigmatic nobles known as…the Shadow family. With no visible features to speak of, these mysterious aristocrats employ living dolls to act as their “faces.” Kate and Emilico are one such pair of mistress and servant, dwelling in their own little world and learning from each other bit by bit with every new day. But in a house of locked doors, living according to rules from no apparent source—how long can their blissfully peaceful existence truly last…?

Emilico is just one of many “Living Dolls” serving in the Shadows House, residents of which are pitch black from head to toe and constantly leak soot that stains the house black. Each “Shadow” is partnered with a Doll, which strangely resembles the other. As a Living Doll, Emilico must keep the house sparkling clean as well as act as the face for her master, Kate. In turn, Kate supports Emilico and treats her as her confidant.

As far as either of them can remember, this has always been the way their world works. However, the bond between a Shadow and a Doll isn’t quite clear. Administrators watch over the young pairs from the higher levels of the mansion and judge them—but for what purpose?

So-ma-to (ソうマとう Soumatou) is name of the duo thats made the “Shadows House” manga series. The duo consists of Nori (のり Nori?) the original author now in charge of design, and Hishi (ひっし Hishi?) in charge of drawing.