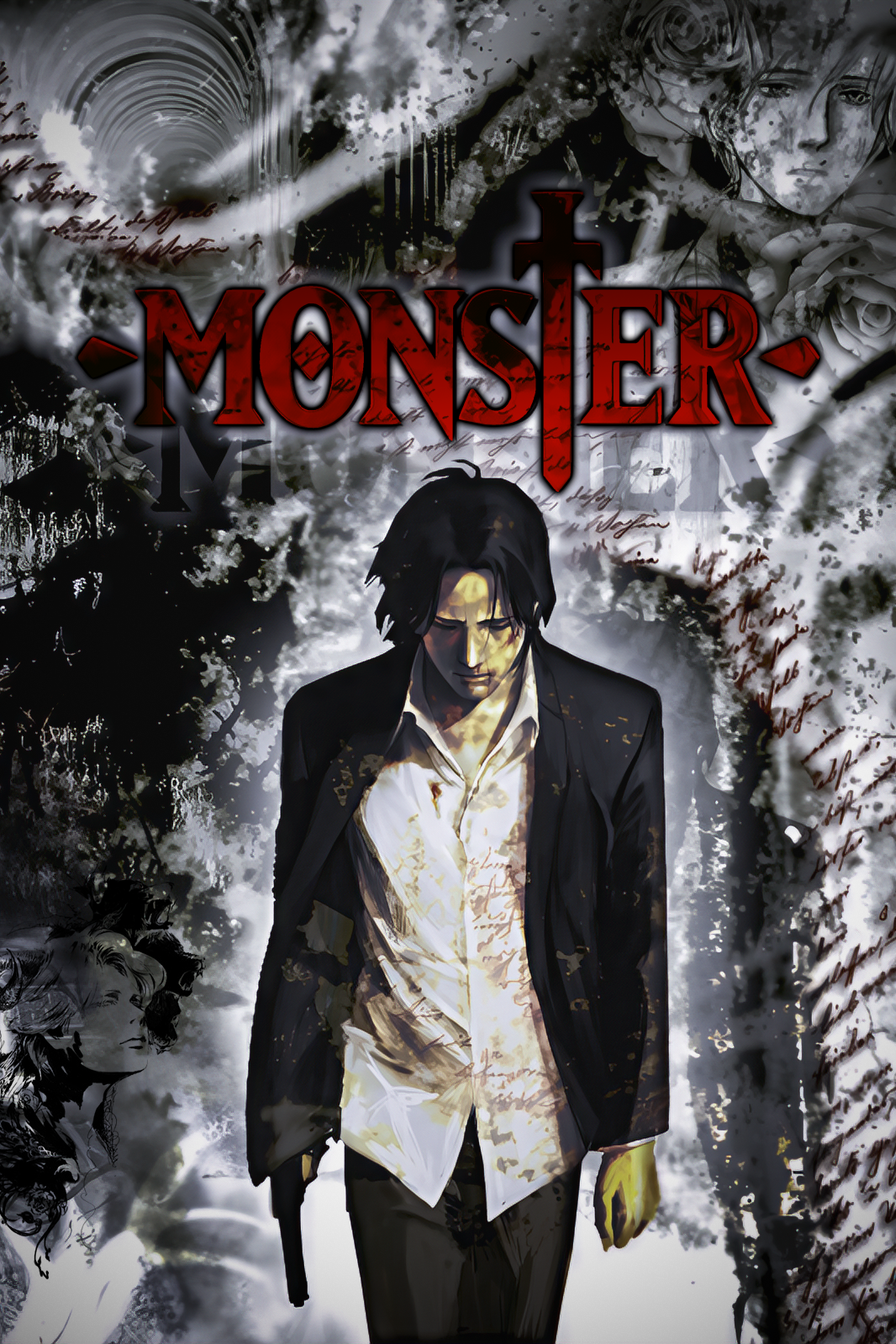 Monster (stylized as 🢒M⊙NS†ER🢐) is a Japanese manga series written and illustrated by Naoki Urasawa.

Johan is a cold and calculating killer with a mysterious past, and brilliant Dr. Kenzo Tenma is the only one who can stop him! Conspiracy and serial murder open the door to a compelling, intricately woven plot in this masterwork of suspense.


Everyone faces uncertainty at some point in their lives. Even a brilliant surgeon like Kenzo Tenma is no exception. But there’s no way he could have known that his decision to stop chasing professional success and instead concentrate on his oath to save peoples’ lives would result in the birth of an abomination. The questions of good and evil now take on a terrifyingly real dimension.

Years later, in Germany during the tumultuous post-reunification period, middle-aged childless couples are being killed one after another. The serial killer’s identity is known. The reasons why he kills are not. Dr. Tenma sets out on a journey to find the killer’s twin sister, who may hold some clues to solving the enigma of the “Monster.”

Kenzou Tenma, a renowned Japanese neurosurgeon working in post-war Germany, faces a difficult choice: to operate on Johan Liebert, an orphan boy on the verge of death, or on the mayor of Düsseldorf. In the end, Tenma decides to gamble his reputation by saving Johan, effectively leaving the mayor for dead.

As a consequence of his actions, hospital director Heinemann strips Tenma of his position, and Heinemann’s daughter Eva breaks off their engagement. Disgraced and shunned by his colleagues, Tenma loses all hope of a successful career—that is, until the mysterious killing of Heinemann gives him another chance.

Nine years later, Tenma is the head of the surgical department and close to becoming the director himself. Although all seems well for him at first, he soon becomes entangled in a chain of gruesome murders that have taken place throughout Germany. The culprit is a monster—the same one that Tenma saved on that fateful day nine years ago.

Monster ( – in katakana – モンスタ [Monsutā] ) (a.k.a Naoki Urasawa’s Monster ) is a seinen manga series written and illustrated by Naoki Urasawa, published by Shogakukan in Big Comic Original from December 5, 1994 to Dec 20, 2001, containing 162 chapters in 18 tankōbon volumes. Urasawa later wrote and illustrated the novel Another Monster, a story detailing the events of the manga from an investigative reporter’s point of view, which was published by Shogakukan in 2002.

It was published by Shogakukan in their Big Comic Original magazine between 1994 and 2001, with the chapters collected in eighteen tankōbon volumes. The story revolves around Kenzo Tenma, a Japanese surgeon living in Düsseldorf, Germany whose life enters turmoil after getting himself involved with Johan Liebert, one of his former patients, who is revealed to be a dangerous serial killer.

Urasawa later wrote and illustrated the novel Another Monster, a story detailing the events of the manga from an investigative reporter’s point of view, which was published in 2002. The manga was adapted by Madhouse into a seventy-four episode anime television series, which aired on Nippon TV from April 2004 to September 2005. The manga and anime were both licensed by Viz Media for English releases in North America, and the anime was broadcast on several television channels. In 2013, Siren Visual licensed the anime for Australia.

Monster was Urasawa’s first work to receive international acclaim and success; the manga has sold over 20 million copies, making it one of the best-selling manga series in history. The manga has won several awards, and its anime adaptation has been called one of the best of its decade.

Naoki Urasawa’s career as a manga artist spans more than twenty years and has firmly established him as one of the true manga masters of Japan.

Born in Tokyo in 1960, Urasawa debuted with BETA! in 1983 and hasn’t stopped his impressive output since. Well-versed in a variety of genres, Urasawa’s oeuvre encompasses a multitude of different subjects, such as a romantic comedy (Yawara! A Fashionable Judo Girl), a suspenseful human drama about a former mercenary (Pineapple ARMY; story by Kazuya Kudo), a captivating psychological suspense story (Monster), a sci-fi adventure manga (20th Century Boys), and a modern reinterpretation of the work of the God of Manga, Osamu Tezuka (Pluto: Urasawa x Tezuka; co-authored with Takashi Nagasaki, supervised by Macoto Tezka, and with the cooperation of Tezuka Productions).

Many of his books have spawned popular animated and live-action TV programs and films, and 2008 saw the theatrical release of the first of three live-action Japanese films based on 20th Century Boys.

No stranger to accolades and awards, Urasawa received the 2011 and 2013 Eisner Award for Best U.S. Edition of International Material—Asia, and is a three-time recipient of the prestigious Shogakukan Manga Award, a two-time recipient of the Osamu Tezuka Cultural Prize, and also received the Kodansha Manga Award. Urasawa has also become involved in the world of academia, and in 2008 accepted a guest teaching post at Nagoya Zokei University, where he teaches courses in, of course, manga.