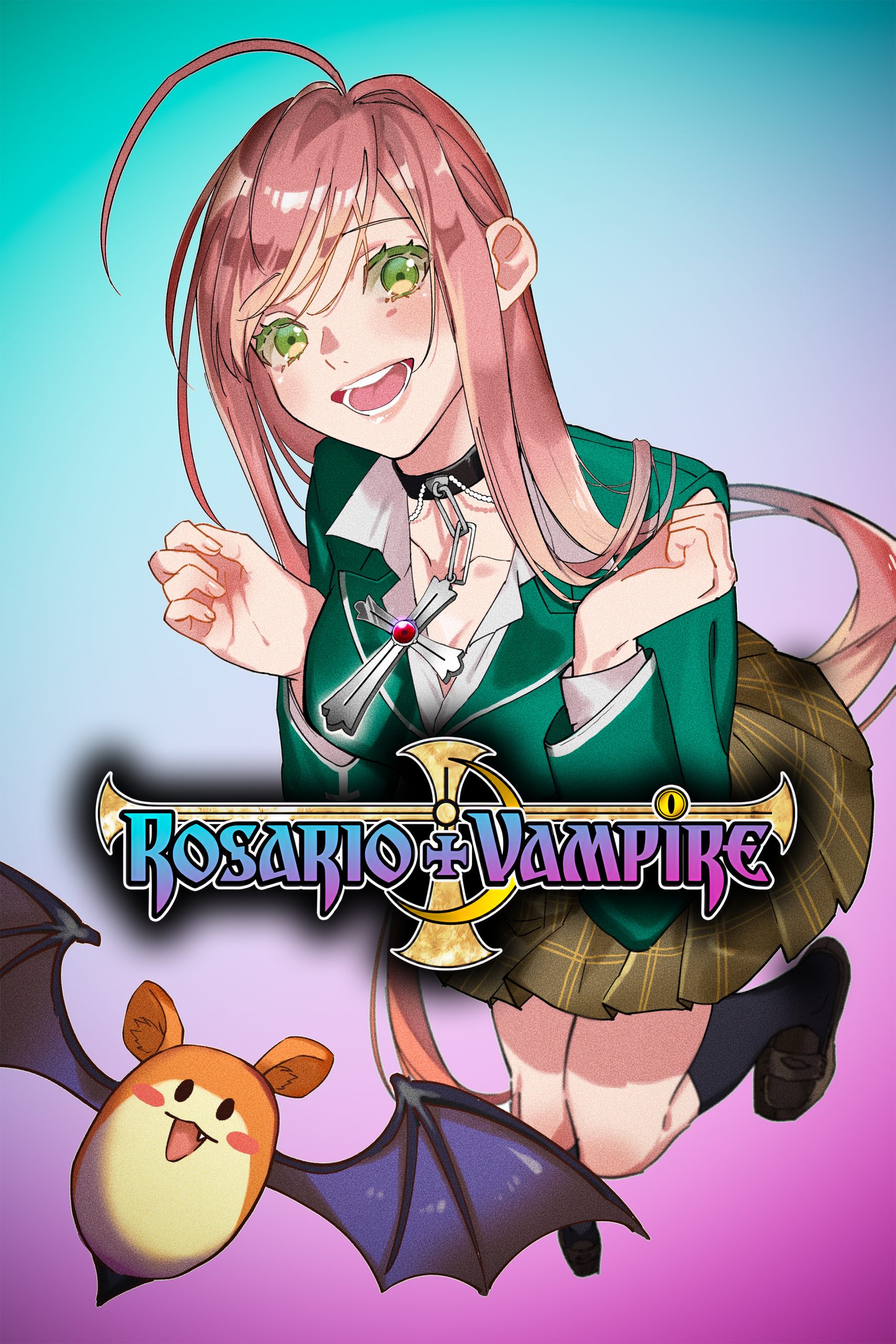 Love bites when monster girls compete for the affection of one average human guy!
All-around average teenager Tsukune can’t get accepted to any high school save one…but on his first day, he finds the rest of the student body doesn’t appear average in the least. Best of all, the cutest girl on campus can’t wait to fling her arms around his neck! Wait a sec—are those her teeth around his neck too…? Does Tsukune have a chance in H-E-double-hockey-sticks of raising his grades at a school where the turf war isn’t between the jocks and the nerds but the vampires and the werewolves?

All-around average student Tsukune can’t get accepted to any high school save one…but on his first day, he finds therestof the student body doesn’t appear average in the least. Best of all, the cutest girl on campus can’t wait to fling her arms around his neck! Wait a sec’–are those herteetharound his neck too…? Tsukune’s going to have one heck of a hickey when he gets home from Monster High! But does he have a chance in H-E-double-hockey-sticks of raising his grades at a school where the turf war isn’t between the jocks and the nerds but thevampiresand thewerewolves? LESSON ONE: VAMPIRES QUIZ WHAT’S THE BEST COURSE OF ACTION WHEN A PERT CLASSMATE ATTEMPTS TO SNACK ON YOUR JUGULAR?a. Run for your life and the sanctity of your soulb. Invite her out for a strawberry soda, heavy on the syrupc. Scream like a boy and hide in the principal’s officed. Let her have a few sips while you check out her spectacular quadriceps

Aono Tsukune is so hard up on luck, that he can’t even get admitted into high school. His parents finally find him a school with no tests required for admittance, out in the middle of nowhere. He finds out the school is a youkai (monster) academy, Just as he is about to resign himself and get back on the bus home, he bumps into a beautiful girl. Turns out this beautiful girl, Akashiya Moka, is also a vampire who bites him right off the bat. They become friends and Tsukune is ready for a happy school life with her, until he finds out that if a human is found on the school grounds, he or she should be killed. Now Tsukune must conceal his identity from the rest of the monsters at school, while at the same time being a ready snack for Moka when ever the urge takes her. What effect will this have on Tsukune and will Moka be able to keep him out of harm’s way?

Rosario + Vampire (Japanese: ロザリオとバンパイア, Hepburn: Rozario to Banpaia) is a Japanese manga series written and illustrated by Akihisa Ikeda. The story revolves around Tsukune Aono, a boy who inadvertently enrolls in a boarding school for monsters. He quickly befriends Moka Akashiya, a vampire who soon develops an obsession with his blood, and later meets other monster girls who soon take a romantic liking to him. The manga was serialized in Shueisha‘s shōnen manga magazine Monthly Shonen Jump from July 2004 to June 2007, when the magazine ceased its publication. An extra chapter was published in Weekly Shōnen Jump in September 2007. The chapters were collected in ten tankōbon volumes.

A sequel, titled Rosario + Vampire: Season II, was serialized in Jump Square from November 2007 to February 2014. An epilogue chapter was published in Jump SQ.19 in April 2014. The chapters were collected in fourteen tankōbon volumes. Both manga series were licensed in North America and in the United Kingdom by Viz Media, and in Australia and New Zealand by Madman Entertainment. The series also spanned three CD dramas, two visual novels, a novel adaptation, and two internet radio shows.

A 13-episode anime adaptation of Rosario + Vampire aired in Japan between January and March 2008.[4] A second season of the series, Rosario + Vampire Capu2,[a] aired in Japan between October and December 2008. The anime is licensed in North America by Funimation, which is now known as Crunchyroll, who released both seasons on December 20, 2011.[6] The anime is also licensed in Australia and New Zealand by Madman Entertainment, who released both seasons in 2012.[7]

Both manga series were licensed in North America and in the United Kingdom by Viz Media under its Shonen Jump Advanced imprint, and in Australia and New Zealand by Madman Entertainment. Viz Media released the first series between June 8, 2008, and November 3, 2009, and the second between April 6, 2010, and May 5, 2015.

Akihisa Ikeda was born in 1976 in Miyazaki. He debuted as a mangaka with the four-volume magical warrior fantasy series Kiruto in 2002, which was serialized in Monthly Shonen Jump. Rosario+Vampire debuted in Monthly Shonen Jump in March of 2004 and continued in the new magazine Jump Square (Jump SQ) as Rosario+Vampire, Season II. In Japan, Rosario+Vampire is also available as a drama CD. In 2008, the story was first released as an anime, followed by an adaptation of Season II. And in Japan, there is a Nintendo DS game based on the series.