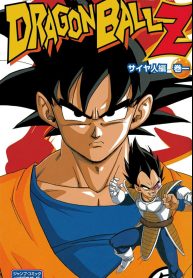 Shueisha began releasing animation comics of the Dragon Ball Z TV series in late-2005, beginning with the Saiyan arc. After reaching the end of the Freeza arc and covering the first 107 episodes of the series in 15 volumes, the release went on hiatus with no announcement about its possible continuation. The comic line eventually resumed a year later, although skipping the TV-only Garlic Jr. arc, and instead picking up with the Artificial Humans arc. The comics would continue unimpeded up through the completion of the Z-era story line. The cover art for each comic was drawn by veteran Toei Animation artist, and character designer for the later portion of the series, Katsuyoshi Nakatsuru.