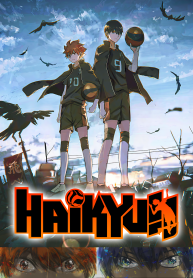 Haikyu!! (ハイキュー!!) is a Japanese manga series written and illustrated by Haruichi Furudate. It was serialized in Shueisha‘s shōnen manga magazine Weekly Shōnen Jump from February 2012 to July 2020, with its chapters collected in 45 tankōbon volumes.

Shoyo Hinata is out to prove that in volleyball you don’t need to be tall to fly!

Ever since he saw the legendary player known as “the Little Giant” compete at the national volleyball finals, Shoyo Hinata has been aiming to be the best volleyball player ever! Who says you need to be tall to play volleyball when you can jump higher than anyone else?

After losing his first and last volleyball match against Tobio Kageyama, “the King of the Court,” Shoyo Hinata swears to become his rival after graduating middle school. But what happens when the guy he wants to defeat ends up being his teammate?!

Haruichi Furudate began his manga career when he was 25 years old with the one-shot Ousama Kid (King Kid), which won an honorable mention for the 14th Jump Treasure Newcomer Manga Prize. His first series, Kiben Gakuha, Yotsuya Sensei no Kaidan (Philosophy School, Yotsuya Sensei’s Ghost Stories), was serialized in Weekly Shonen Jump in 2010. In 2012, he began serializing Haikyu!! in Weekly Shonen Jump, where it became his most popular work to date.

NOTES:
. Done by LinkedHero.
. I whiteboxed for the first 8 volumes, so not everything looks perfect. Starting vol 9 I just use a heavy stroke for the text. Later I will replace the first 8 volumes, also not all of the SFX is translated, that takes a while so I will probably just update it later whenever.