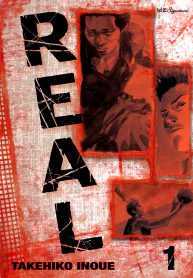 Tomomi Nomiya, former captain of his high school’s basketball team turned delinquent, decides to drop out of school after he is crushed by the guilt of ruining a young girl’s life in a traffic accident. As he dedicates his free time to helping her, he stumbles upon Kiyoharu Togawa, a former sprinter who has lost the use of his right leg and now plays wheelchair basketball as an alternate outlet.

After challenging Kiyoharu to a one-on-one game, Tomomi is completely defeated. Inspired by this encounter, he realizes that he can’t let his love for basketball die so easily and decides that he will do what he can to help others while striving to become a professional player. Meanwhile, Hisanobu Takahashi, Tomomi’s replacement as the high school’s team captain, gets into an accident and finds himself permanently paralyzed below the waist. Real tells the touching tale of these three young men as they struggle to overcome their disabilities and inner conflicts in order to achieve their dreams while igniting a passion that will bring them together.