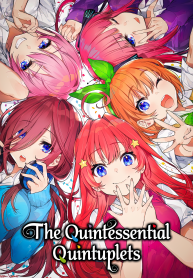 The Quintessential Quintuplets (五等分の花嫁, Go-Tōbun no Hanayome, lit. “Five Equal Brides” or “The Five-Fifths Bride(s)”) is a Japanese manga series written and illustrated by Negi Haruba. It was serialized in Kodansha‘s Weekly Shōnen Magazine from August 2017 to February 2020, with its chapters collected into fourteen tankōbon volumes.

A high school romantic comedy with five times the cute girls! A high school boy must work part-time to help five sisters study so they can graduate, but the only thing these quintuplets have in common is that they all hate studying!

Five girls who want to do anything but study, and their tutor: a high school boy who’s got book smarts and not much else. Futaro Uesugi took the tutoring gig because he was desperate for cash, but when his students—the five beautiful daughters of a wealthy businessman—find five times the excuses to slack off, what can he do?! At this rate, the sisters won’t graduate, so if he wants to get paid, Futaro must think of a plan to suit each of them … Which feels hopeless when five out of five of them think he’s a loser!

Considered a genius, high schooler Fuutarou Uesugi excels at studying and obtains a perfect score on every test. Due to his intense focus on that regard, he is a reclusive person with no friends. Additionally, he lives in a tight financial state as a result of family debts.

Fuutarou’s mundane lifestyle is interrupted when Itsuki Nakano, a new transfer student, contests him for his usual lunch seat. After a short altercation, Fuutarou emerges victorious by insulting Itsuki’s eating habits, which angers her enough to leave. However, when Fuutarou learns that he has been offered the private tutor position of a wealthy family’s academically hopeless daughters, he immediately regrets his prior encounter. It turns out that the beneficiaries of his tutoring are none other than Itsuki and her four identical siblings: the shy Miku, the cheerful Yotsuba, the devious Nino, and the mature Ichika!

Teaching these quintuplets may prove more difficult for Fuutarou than he initially expected, as the last thing they want to do is seriously study. Now, Fuutarou must face the various challenges of tutoring five beautiful yet eccentric girls.