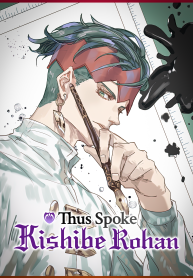 Thus Spoke Kishibe Rohan, known in Japan as Kishibe Rohan wa Ugokanai (岸辺露伴は動かない, “Rohan Kishibe Does Not Move”), is a series of manga one-shots created by Hirohiko Araki. It is a spin-off from Diamond Is Unbreakable, the fourth part of Araki’s JoJo’s Bizarre Adventure series, and features the character Rohan Kishibe, a manga artist who travels around the world to get inspiration from people’s lives. The title of the one-shot is a reference to the book Thus Spoke Zarathustra by Friedrich Nietzsche.

JoJo’s Bizarre Adventure is a groundbreaking manga famous for its outlandish characters, wild humor, and frenetic battles, and this spin-off featuring the popular Rohan Kishibe continues the tradition!

Debuting in the same deluxe hardcover format as the hit JoJo’s Bizarre Adventure manga is a standalone series featuring everyone’s favorite manga artist, Rohan Kishibe! Rohan has freed himself of Josuke Higashikata, but that doesn’t mean his life is going to be easy! No, now the supernatural has come knocking, and Rohan must contend with an all-new level of bizarre adventure…

Hirohiko Araki made his manga debut in 1981 with the Wild West story Busô Poker. He experimented with several genres, including mystery (Mashonen B.T.) and action-horror (Baoh), before beginning JoJo’s Bizarre Adventure in 1986. Propelled by imaginative storylines, weird imagery and individualistic artwork, JoJo’s Bizarre Adventure is one of the longest-running and most popular shonen manga ever. Araki’s most recent works include a series set in the JoJo universe, JoJolion.