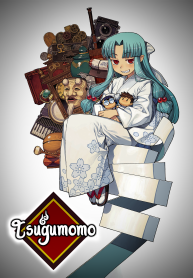 Tsugumomo (つぐもも) is a Japanese manga series written and illustrated by Yoshikazu Hamada, started in 2007. Two volumes of the series were published in English by the now-defunct JManga service between August 2011 and March 2012.

Kazuya Kagami’s most treasured possession in the world is the obi left to him by his late mother. The scent of cherry-blossoms infused into it helps him through his day – but he never expected it to save his life, becoming a beautiful kimono-clad girl who calls herself an “artifact spirit.” Her name is Kiriha, tsukumogami of the sash, who naturally moves in with him, as he is her “owner.” Throw in Chisato, his bespectacled friend, an overprotective older sister who wants to take baths with him, a busty priestess, a seductive sorceress named Kokuyoura, and Kazuya’s life has just gotten a lot more…interesting.

Kazuya Kagami never goes anywhere without the precious “Fukurobi” his mother gave him. One day a beautiful, kimono-clad girl named Kiriha appeared before him. Kiriha naturally began to live with Kazuya in his room. Then there’s Chisato, Kazuya’s childhood friend with glasses and a ponytail, who meddles in his affairs. Soon there’s also an overprotective older sister who seems to want to take baths with him. Jumble in a huge-chested priestess, a good-looking sorceress named Kokuyoura, beautiful women, and hot girls, and Kazuya’s happy, embarrassing, confusing life begins…