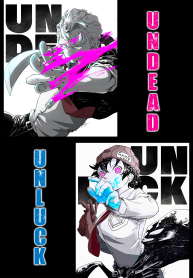 What happens when an unlucky girl meets an undead guy? Pure chaos!

Tired of inadvertently killing people with her special ability Unluck, Fuuko Izumo sets out to end it all. But when she meets Andy, a man who longs for death but can’t die, she finds a reason to live—and he finds someone capable of giving him the death he’s been longing for.

Yoshifumi Tozuka made his manga debut with the one-shot Uchuu Kankou C-Arc (Cosmic Arc Travel), which was published in Jump Next! in May 2014. Undead Unluck, his first series, began serialization in Weekly Shonen Jump in January 2020

After reading the conclusion of her favorite manga series, Fuuko Izumo finally feels ready to end her existence. For the past 10 years, Fuuko has been afflicted by a condition that brings extreme misfortune to anyone who touches her. This has had a drastic effect on her surroundings, even inadvertently resulting in the deaths of those around her—including her parents.

As she stands on a bridge above train tracks, Fuuko is touched by a strange man, causing the footing underneath him to break and dropping him in front of an oncoming train. However, when Fuuko finds the man’s corpse, she discovers that his body is regenerating and that he is coming back to life.

The man, whom Fuuko names Andy, is immortal—and like her, he also wishes for death. Initially dismissive, Fuuko eventually decides to team up with Andy to give him the best death possible; but a mysterious organization lurks in the shadows, hoping to take advantage of the duo’s bizarre abilities.